skip to main | skip to sidebar

Playing on BBO with a pick up partner last night, I had the kind of hand that always haunts for a while afterwards. My partner picked up this hand with us Vul and the opps NV, Q97 AQ74 J64 A54. I opened 1C in first seat and he bid 1H, I bid 2S, and I think I would bid 3C with this hand, trying to find out where to play it. Instead he bid 3S, which might work out and might not. I bid 4S. I think his hand calls for a move forward here, he has an opener opposite a reverse, but how, since he painted himself into a corner. And how do you even know the Spades are the right suit. I think at this point, I would bid 5C and hope for a 5D bid from partner, but he bid 4N, KC. I answered 5H (2 without the Q) and he jumped to 6S.

The opponents were not on our side and unsportingly cashed the AK of Diamonds for down 1 on the go. Fortunately Spades were 3-3, so AK84 opposite Q97 came in for no losers, for only down 1. My partner merely said unlucky, sigh.

Here is the full hand. 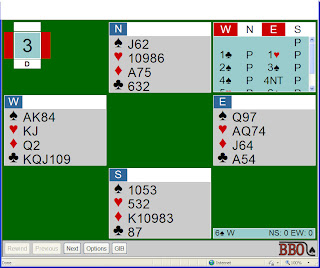 I still feel I have a reverse, it is just wether I should bid 2S or 2N over the 1H bid. I thought with the Qx of Diamonds, 2S was more descriptive of my hand. I looked later, and almost everyone bid 1S on the same auction with my hand, so I guess I was wrong.
The worst part was the scores on the board where it was played by other people. Of the 16 times it was played, 7 of them were in slams, 1 6S, 1 6C, 1 6H (!), and 4 6N. It was set twice of those 7 times. And of the 3 6N that made, they were all played by E, so South did not lead his 5 card Diamond suit. The other bad part was that 3N went down twice, both times by E. In each case a Diamond was led, and declarer put up the Q of Diamonds (!) at IMPS no less. At least in those cases, some justice was served.
I think the main part of this hand is the E hand has to tred carefully on this hand, even with an opener opposite the reverse. The 4333 distribution and effective 3 small in the unbid suit are not wonderful holdings. Even with a reverse, the hand may not play were anywhere, and you need partner to take a Diamond cue-bid to head for slam anywere. That is why I said I liked the 3C bid, trying to get partner to bid 3D. On this hand, you will probably hear 3H now, and you can bid 3S or 3N over that. At least that gets the core features of your hand across, and lets partner move on if they can.
Posted by David at 17:52

David
An unknown bridge player in a small city in the Canadian West. Known to be slightly aggressive on occasion.