skip to main | skip to sidebar

Had a hand on BBO with a pickup partner last night, that I am not sure how you are supposed to handle it, other than hopefully to survive. We did not.

Vul vs Not in first seat, you pick up AQJ542 95 4 AK85 and open 1S. You are playing SAYC and partner bids 2H, which is not GF, but standard. This now goes 3D on your right, and you bid 3S, 4D on your left, P P back to you. You do have a fairly good hand, with shortness in the opponents suit, but partner not bidding 4S here is a bit of a problem, since it means you should not get 3 card support.

It looks like the options are double, 4H, 4S, and Pass. I do not think Pass is a valid option at IMPS, so you can discard that. Double might be right, but you do not have a lot of defense and are you going to get this more than 1 down, if you even beat it. So would rule that out as well, leaving a tough choice between 4H and 4S. Since you have already rebid your 6 card suit, which is not that solid, I think 4H has to be right here, and let partner decide. Anytime he has 2 decent Spades, you will probably get returned to 4S, and with good Hearts, partner will leave it in 4H.

Now for the surviving part, this is not your hand. The idea on this hand is to get out with the least damage, since this is a true nightmare hand. Here is the full hand, in all it’s gory details. 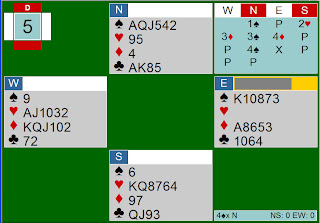 In either major, the taps start right away, and with 5 good cards behind each major, there are a bunch of losers. I had the Heart hand, and decided to bid 2H over 1S, even though slightly under strength, but what else are you supposed to bid, playing SAYC, and not having the agreement that 1S-3H shows this kind of hand (A very good thing to play, in my opinion, since these hands are designed to give you nightmares, and this one in particular). Anyways, at our table, the N hand decided that he should show his Spades again, and this went double behind him, and a Diamond was led and returned. This now got messy, and when the smoke had cleared, we were –800. I think 4H is always destined for down 1, perhaps down 2, but reading the position will allow you to do better, and taking the first Diamond tap in the short Heart hand really helps.

At this point, my partner started in on me for the 2H bid, since that was obviously the source of our disaster, according to him. I did not think I needed to get into the discussion about what constitutes a suit you can bid, and then rebid freely at the 3 and 4 level with no support, since it was obviously irrelevant to the discussion. But I should give some cudo’s to our opps for laying the trap for us. The 3D and 4D bids were well judged, and the opps did not make any mistakes once we had wandered into the danger zone.

David
An unknown bridge player in a small city in the Canadian West. Known to be slightly aggressive on occasion.